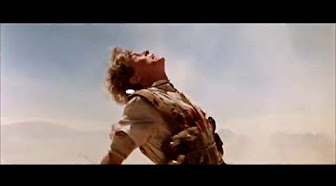 When examining Archy, he was filled with some sort of mischief from the beginning of the movie.  We start out the film with a commitment to a foolhardy barefoot race across the desert against a man on horseback.  Later he insists on competing in a legitimate footrace, albeit with shoes this time, a mere three days after tearing his feet apart.  Of course this is while surreptitiously planning his escape from the status quo by joining the army.  After failing on his first attempt to enlist, he proceeds to hop on a train to destination unknown and attempt the crossing of a 50 mile wide dry lake bed with less than adequate supplies.  With all these opportunities to avoid conflict he finally makes it to the front.  In the end he passes up one more chance to play it safe by being a runner for the command.

There was no one prodding him over the edge of the trench in the final human wave.  In fact, there probably would have been no one left to record is alleged cowardice if he had backed out in that moment.  I must reject the premise of him subserviently obeying military orders, and I resent the notion that it was anyone but Archy’s decision to be in the face of danger.  Archy followed his own desires, and he was loyal only to his own whims; this is poor venue to attack authority given that Archy bucked said authority just to be in the thick of things to begin with.

Perhaps some of us are just wired a certain way.  Whether it is going out in 20 foot storm surge or going out again when you’ve already nearly drowned, some people take risks regardless of the consequences.  Washed up on the beach and visibly shaking, the subject may be capable of only laughing at the sheer absurdity, nay stupidity of the situation and to the horrified onlookers the only relevant thing to say seems to be, “you should of seen the time I slapped a crocodile on the a–* in the Yucatan!”  Some fools never learn.  Some of us are in fact proud of it.

It is not the critic who counts; not the man who points out how the strong man stumbles, or where the doer of deeds could have done them better. The credit belongs to the man who is actually in the arena, whose face is marred by dust and sweat and blood; who strives valiantly; who errs, who comes short again and again, because there is no effort without error and shortcoming; but who does actually strive to do the deeds; who knows great enthusiasms, the great devotions; who spends himself in a worthy cause; who at the best knows in the end the triumph of high achievement, and who at the worst, if he fails, at least fails while daring greatly, so that his place shall never be with those cold and timid souls who neither know victory nor defeat. (1)

Shall we judge Archy too harshly?

For every nine young men fated to join Archy in death, there is one more who manages not only to succeed but to flourish.  While most run away from disaster and danger, a small minority are all drawn to it like moths to a bulb.  Whether it is selfless sacrifice or simply dumb luck, these people manage to advance the human race in leaps and bounds.  It is that innate curiosity that led Benjamin Franklin to nearly kill himself in a lightning strike.  The same heart that beats in Archy’s chest is that of the first sailors heading out across the Atlantic or around the Cape of Good Hope.  The same soul is shared by Edmund Hilary.  These people should they manage to somehow against all odds survive to an old age, they will justify their exploits by saying, “because it was there” or “because it seemed like I good idea at the time.”

*This is a slightly inaccurate portrayal of crocodilian anatomy.  For argument’s sake, assume the area to the rear of the legs, but in the forward half of the tail.

Author’s Note: This was originally written for my MA in International Relations and some slight changes have been made for it to be readable in an online format.