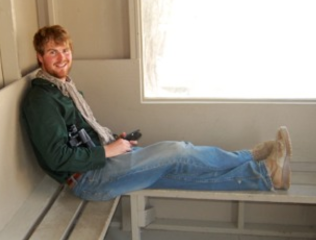 (The Following Was Published in Notes from Afghanistan, a collection of essays, letters, and daily experiences during a year in Afghanistan)

There is some merit to what you are saying about Islam, but remember that Christianity had a 600-year head start on Islam, and they were still having witch trials 300 years ago. Of course there are violent verses in the Koran, but no more than what is in the Bible. Jesus himself said, “I come not to bring peace, but to bring a sword.”

Even in the last century we have blood on our hands as a culture. The ethnic cleansing in the former Yugoslavian Republics was a manifestation of nationalism, ethnicism, and Christianity combined into a whirlwind of hate. Need I point out that the victims were Muslims? Heck, half the fighting was between Serbians and Croatians, who are ethnically identical except one group was Catholic and the other Eastern-Orthodox. Yes, the Muslims are fighting over bullshit dogma, but based on our actions, I don’t think the West is as evolved as we’d like to think.

As far as being here for 10 years and seeing no change, I am seeing plenty of change in the new generation. Some 8 million people are currently enrolled in school.

A pessimist would say that 1/3 of the population in school is just a testament to the size of the youth bulge in Afghanistan, and an optimist will say that an entire genera-tion is capable of a paradigm shift; both are correct.

Paradigm shift is difficult—nigh impossible. Even within the confines of the most powerful and free nation in the world, it took 30 years to see any real measurable change in the black population after the civil rights movement. Whether from linger-ing prejudice from the white majority or a self-righteous chip on the shoulder of a pissed off ethnic group, aside from what was forced upon business and government through affirmative action, no real change was demonstrated until the last 15 years. No matter how you spin it, change takes time. It’s also a lot easier to destroy than to build. A house takes 2-6 months to build, but one bulldozer or some dynamite can de-stroy it in minutes. Afghanistan was never prosperous; however, it was peaceful and stable. After 20 years of war and a brain-drain of all the doctors, lawyers, and teach-ers fleeing to other countries, Afghanistan was left with a median age of ~15. Now, we are rapidly approaching a generation. Each year, the size of the population that has completed high school or university increases, which means that each year we con-tinue on this path, we allow young professionals to enter the market, universities, gov-ernment, and military that are more capable than the previous year. The old guard is dying off and being replaced with motivated and educated people trying to build their own nation. Every time I walk into my classroom, I see eureka moments and epipha-nies that things can be better. I’m just one guy, but I feel I’ve made a noticeable mark on things with my presence, and it makes me confident that the same is being seen across the country. We can downsize our force here. I don’t think they are ready to have the training wheels removed entirely, but a small force of western intel, air force, and special operators kept here for another 10 years will provide enough support for them to take control of their country. In the meantime, we can get rid of most of the star-chasing O-5s and above. You and I have both lost our share of friends out here, but I’d like to think that Ben, Brad, and others died for something honorable and valu-able. If you disagree with me, that’s fine, but I think a complete pullout now would dis-honor their memory.

I agree; let’s downsize the military and pull out troops, but let’s do it in places we’ve already won. The Soviet Union is no more, and while Putin is a pain in the ass, he’s a pain in the ass that has been castrated economically and militarily. Let’s take the ~40,000 troops we have in Germany and send them home. We can maintain a Mediterranean presence in Italy and an Atlantic presence in Britain, but anything else in Europe is superfluous. We won in Korea. Sure, maniacs run the North, but the South Korean Republic is friendly, democratic, and possesses one of the strongest economies and strongest militaries in the world. If they can’t defend themselves after 50 years, they deserve to fall. The same goes for Japan. China may be a threat, but their entire military infrastructure is paid for by the interest we pay on our Chinese debt—a debt developed predominantly because of increased military spending. So the “need” for a “defensive” force in Japan and Korea becomes a self-fulfilling prophecy as China grows stronger and we grow weaker.

Let’s also get out of the dictator business. Cheap gasoline in the 90s was nice, but the cost of doing business with monarchies and dictators is unfathomable. It’s more than the financial toll of 9/11; it’s the soul of our nation. If we abandon domestic principles internationally under the guise of security, then we should just turn our country over to Muslim fundamentalists, because there isn’t anything worth fighting for. Of course, pure idealism is just as bad as pure realism. Realism gives us blow-back, and idealism gives us a populace that is pissed off at our presumption of right-eousness. Instead of an either or approach that pits realist hawks against idealist hip-pies, we should mesh the two policies and only commit our forces when it fits realism AND idealism. I think Libya was an example of that. Removing Ghadaffi was strategi-cally sound (realism). They asked for our help (idealism).

I’m not trying to change your mind. Your mission in Afghanistan has been com-pletely different than mine, so you have a right to your views, but I just wanted to share my perspective.