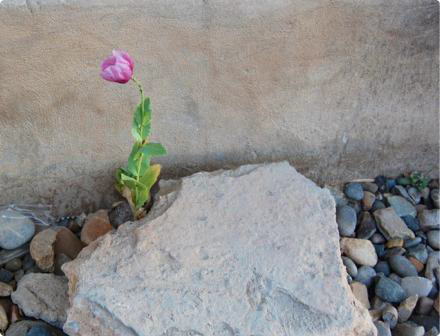 The following is an excerpt of Notes from Afghanistan which I published as a day-to-day account of a year in Afghanistan as a contractor linguist in 2013. If you enjoy this excerpt, please consider buying the full book on Amazon using the link provided at the end.

May 1st
I’m going to miss this place; that is all.

May 2nd
The poppies are blooming in full force. They are beautiful plants. Funny that I tried my best to grow crops, largely failing, and poppies have sprung up outside my door without any help. I’m looking into harvesting some raw opium just for the hell of it. I might never have another chance.

After the flower has finished blooming, it closes in on itself in order to produce the seeds. At some point, one scores the seedpod gently with a razor blade and a milky substance trickles out and dries into a paste. Afterwards, the dried paste is wiped off and collected and processed into heroin.

May 3th
I decided today is the day for my opium trip, as I will be leaving this installation tomorrow or the day after. I’ve waited until the last moment, because I don’t know if I will experience any intense withdrawal that requires additional hits, so by ensuring that I will not be able to readily get more, it will eliminate the possibility of a major addiction. That’s my theory at least.

I had planned on scoring the poppies in the morning and sample them in the evening, but to my surprise, someone (probably Afghans) has already scored the bud. Someone is harvesting the poppies right here in our compound, which I find comical. Anyway, since there was already a copious amount of resin available on the poppy heads, I snapped off three and took them back to my room. I had no idea of the appropriate serving size of opium, so I decided to taste only a little bit at a time. Eating opium is less efficient than smoking it or making a tea, but I have limited options.

Immediately upon contact, the resin, which tastes like the pods of snap peas, numbs the tongue. The chemical is in the system relatively quickly, and the buzz was similar to that perfect amount of beer right before going over the top and drinking too much. Unlike beer, I perceived no loss of fine motor skills and twirled a pencil in my fingers as a test to see if I could.

While testing my limitations, I continued to dab a little on my tongue and swallow in a piecemeal manner still not knowing how much was too much. Looking into the mirror, my pupils were more dilated than I imagined possible, but with the exception of slight irritation from the overhead lights, my eyesight remained unchanged. My heart rate, breathing, and hearing also remained unchanged, though my concentration while measuring my beats per minute seemed to fail me.

Additionally, I lost complete sensation to extremities, face, and scalp despite maintaining muscle control. I gently chewed the remaining pods, but perceived no additional chemical. With my supply exhausted, I decided to go for a run. I did a few loops through the compound and at about 20 minutes, began to have hot flashes and shivering simultaneously. It was only about 70 degrees outside, but I was sweating. I finished the run and showered. By the time I showered, I could feel my scalp again, and by the time I was finished with a normal breakfast of a sausage patty, biscuit, and eggs, I was no longer shivering or sweating. I also had some Hershey’s Kisses. I do not know the precise amount I consumed, but I would estimate it to be about the size of a pencil eraser. Obviously, it was enough for a brief high yet not enough to put me in a coma.

May 4th
I perceive no withdrawal today. I suspect I would have to use it repeatedly in order to become addicted, but I do not think the experience was a very good one, and I would not recommend it to anyone. Heroin is said to be better than sex. I haven’t tried that, but I can safely say that opium is not better than sex.

I am done with my work here, and I am leaving on a convoy to Camp Bastion today.