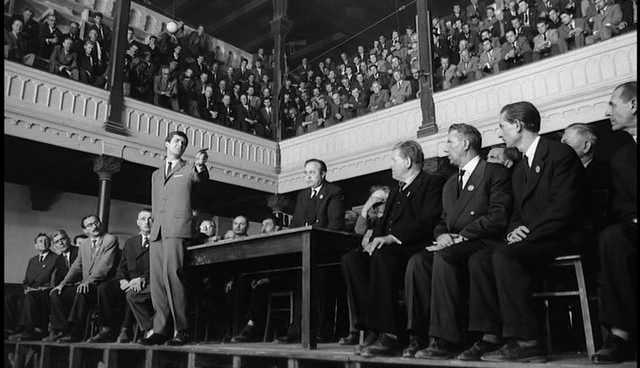 In rereading Kafka’s The Trial I am struck by a similarity between Herr Block and President Trump.

Block is a merchant who has been enduring his own version of the legal system* for nearly five years. His character exists as a contradiction of itself. One minute he is on hands and knees in complete obeisance to his lawyer and the next bloviating about his importance and wisdom earned throughout five years of being on the wrong side of the legal system.

His self-righteous advice to Josef K., is a reminder of an old legal maxim.

“A suspect is better off moving than at rest, for one at rest may be on the scales without knowing it, being weighed with all his sins.”

While seemingly sound advice at this point in the story, we later find out that both the lawyer and the judges hold Block in contempt, a judge recently confiding that:

“Block is simply cunning. He’s gained a good deal of experience and knows how to protract a trial. But his ignorance far outweighs his cunning.”

Though obviously not a pure analog to a fictional character, Trump by any measure, seems to be a case of life imitating art. He is author of his own trial, but not its protagonist. Trump is Herr Block.

He’s cunning and street smart. He knows how to avoid a contract, rip off vendors, and bully his way to power. He knows how to rattle a crowd with insults and contradiction, while simultaneously casting himself as the put-upon victim of an unseen deep-state. He knows how to gaslight his detractors, changing his story so readily that while they respond to the thousand little lies, they are incapable of handing the really big ones.

But in the end, cunning isn’t enough. He’s stepped out of the boardroom and into a legal system he doesn’t understand, filled with career bureacrats who hold him in contempt. He’s abandoned by one personal lawyer and then finds another in Rudy Giuliani. And like the influence peddling lawyers of The Trial Giuliani serves only to draw the noose tighter around Trump’s neck with every action.

The only thing left on his side is time, because like Herr Block, he knows how to protract a trial. More than likely, the 2020 election will be nearly over before a final vote on impeachment in the US Senate.

But in whatever reckoning Herr Trump endures, we return to his own ghost-written words from 32 years ago.

“You can’t con people, at least not for long. You can create excitement, you can do wonderful promotion and get all kinds of press, and you can throw in a little hyperbole. But if you don’t deliver the goods, people will eventually catch on.”

*The Trial is the tale of a man enduring a justice system turned on its head. He has no right to face his accusers or even to know the charges brought against him. Hearings are unannounced and filled with paid sycophants who are assigned to cheer for the various participants, including for the defendant. Lawyers win trials, not on innocence, or even skilled lawyering, but through a vast network of influence peddling.