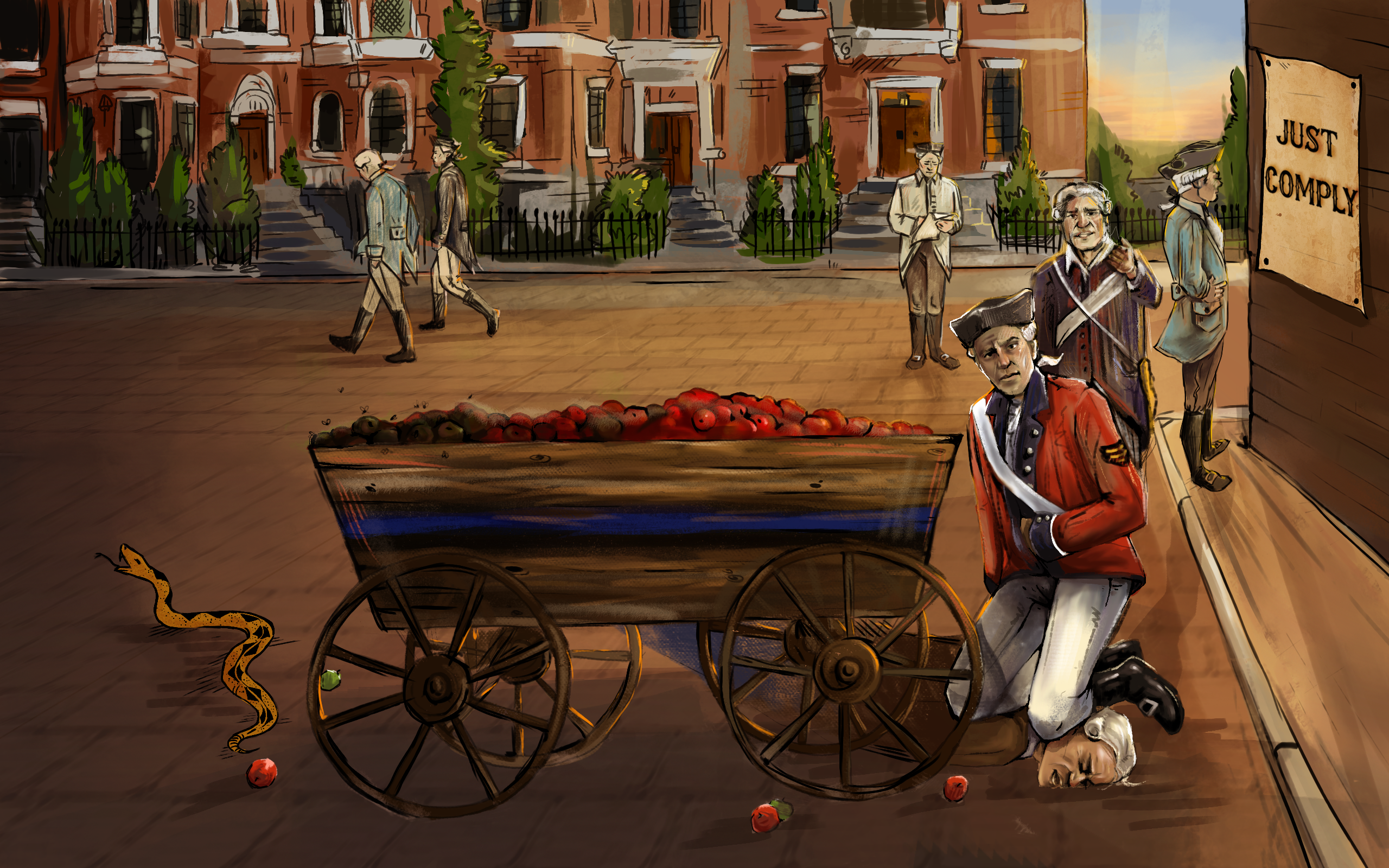 This is a short story in Just Comply, a collection of short stories published in July 2021. If you like this story, please consider buying the book using the link at the end of the story.

The sound of Thunderstruck was streaming directly into his brain through his specially designed cochlear implants. He could feel his heartbeat quickening and his face flushing.

He got up from bed and strode across the floor with a confident enthusiasm, brushing his teeth like a man with his life thoroughly together. He paused momentarily to sway to the music, bobbing his head in a jerking motion before bouncing rooster-like across the floor to a kitchen only feet away from the paisley futon he’d just vacated in his one-room studio.

As he began to prep coffee, Thunderstruck ended with a seamless transition to the opening riff of Limelight and his manic bobbing continued. His morning routine was punctuated only by the opening riffs of the greatest rock hits, usually by the end of the first verse, he was bored of it and wanted more stimulation to keep the blood flowing.

He paused momentarily, his finger hovering above the button of his Keurig waiting for the proper moment.

As the music mellowed out immediately after “the underlying theme” he pressed the button for a medium-sized cup of coffee.

When the Keurig began gurgling and hissing at him, he didn’t hear it. The phone app that was piping in Limelight briefly paused to drown out the sound; all he could hear was the pleasant twittering of birds in spring.

Background Music™ was the latest in personal assistance from Lifespotting Inc.[1]

The cochlear implants had been installed as a child to treat his debilitating misophonia. He’d been unable to cope with kindergarten, shrieking with distraction at the sound of markers on a white board, creaking desks, and other common noises that most people could just ignore.

After missing most of his kindergarten year and having the same problem in first grade, his parents had taken him to a long string of counselors and psychologists.

Some gave him mental exercises to make him think about something else. It hadn’t worked.

Some prescribed anti-anxiety meds. They muffled his response, but they didn’t help him concentrate any better and then in addition to being distracted, he’d fall asleep in class.

It was Dr. Brock, the audiologist, who brought up the issue of a cochlear implant.

“What kind of birds?”

“In the morning, in the springtime when they are all singing”

“And what sounds do you hate?”

“Squeaks. I feel like rats are going to bite me when I hear squeaking. That’s what I think about. Lots of rats.”

“Are you scared of rats?”

“Have you always been scared of rats?”

“I’ve never seen a real rat but when I see them on TV they scare me. I can’t watch.”

“If you could turn squeaking sounds into the sound of birds, would that make you feel better?”

Dr. Brock’s proposal was to connect cochlear implants via Bluetooth to an app on a smartphone. The smartphone could have a program that converts offensive sounds to something pleasant.

He compared his plan to a sound-board operator at a radio station who can dub out profanity in the broadcast with the benefit of a seven-second delay. Using the processing power of the smart phone, the delay could be cut down to a millisecond. Tom’s rats could become birds.

“We wouldn’t suggest surgery in most situations, but your son’s disorder is so extreme, we think it might be                the only option. As you’ve noted, he’s falling behind in school.”

“And so you can make him not hear the sounds?”

“Well, we can’t stop the sound from occurring but by passing it through a program in the phone, it will be                instantly converted into something more pleasant.”

“Will there be any pain?”

“The procedure only lasts a few hours and we’ll use general anesthesia. He’ll wake up with a splitting                headache, but we can prescribe medication for that. I think we could get him in just before the winter break                and have him back in school in January ready to go.”

The surgery had been uneventful and he didn’t remember the headache. He’d been frustrated at first, having been told that squeaks would be replaced with singing birds. But when he woke up at home, his bed springs still squeaked.

They had to wait until two weeks after the surgery to run the program on a smart phone.

Dr. Brock pulled a small glass vial from the shelf and removed its cork. Coincidentally, he used the cork and the vial to watch birds, so it amused him to use it now in this experiment. The squeak of the cork on the rim of the bottle caused small birds living in the brush to pop up and investigate. Because it sounded vaguely like a wounded mammal, it was common to get small birds of prey to fly in close for observation.

He rubbed the cork gently across the glass.

“Okay, so this is the sound you don’t like. Now, let me run it through the synthesizer.”

He rubbed the cork across the glass again.

“I’m sorry, I had to adjust some settings. Let’s try it again.”

He rubbed the cork against the vial for a third time and Tom’s eyes began to light up.

“Very good Tom. I see you know your bird calls. Can we try another one?”

Dr. Brock had a small chalkboard and scratched it with his nails. Tom’s parents cringed at the sound but Tom’s eyes lit up again.

“Yes, it is an American wigeon.”

“Neat, I haven’t learned those yet.”

Dr. Brock pressed play and the cacophony of squeaking rats startled him, but Tom just smiled.

“Good job. I used flocking birds for noises that are continuous, so if it were say a squeaky wheel on a janitors                cart going down the hallway, you’d hear blackbirds or starlings or something like that.”

Dr. Brock chucked and said, “Your dad is right.”

Tom had been able to go back to first grade and catch up on his studies. He wasn’t a great student, but he’d been able to do okay without the constant distraction of the misophonia. Sometimes the kids would tease him, knowing that if they all made squeaking noises at once he’d hear a flock of birds, but he would just smile and go with the joke.

Years later, as an adult, the manufacturer was designing a musical device similar to Pandaora, except tailored toward the mood of the patient. Because Tom already had the cochlear implants, he was used as a beta tester for the program.

A small sensor embedded under the skin could detect endorphins, pheromones, and hormones and run music associated with those. The early marketing tools proposed “Background Music: A Soundtrack for Your Life” The principle was that having a musical accompaniment could make people happier and more efficient in their lives.  In Tom’s case, it had created the most energized brewing of Keurig coffee known to mankind.

As he sat down to enjoy the coffee, the tone of the music changed to the soft sound of Yo-Yo Ma playing Bach’s Prelude from Cello Suite No. 1. He sipped his coffee and read the news on his phone, swaying his head gently with the up and downs of the music, his pulse slowing and his pensive early thoughts calming him down to finish getting dressed and out the door.

He wasn’t actually late, but he loved rushing to get ready to Yakety Sax, the gaudy saxophone music of Boots Randolph used in all the zany chase scenes on the BBC. If he exclaimed loudly, he could get his cortisol to rise just enough to set off the music and rush about the room like the mad hatter.

Dressed and out the door, he began unlocking his bike to the opening notes of Entry of the Gladiators and began to cycle down the sidewalk to its classical frolicking brass instruments associated with every circus act in history. He pedaled in time with the music leisurely headed to his courier job downtown.

For breakfast he was planning on eating some leftover cake from Bill’s 41st birthday. As he bounded up the stairs, the theme song from Seinfeld popped up in his ears. He slipped past the front desk and into the breakroom and grabbed the cake box. It was empty. The dramatic music from Young Frankenstein played.

To no one in particular, he remarked “Who put the empty cake box back in the refrigerator?”

As he tossed the empty box into the trash, his shoulders slumped. He really wanted that piece of cake. Adagio for Strings began to play, the rising tones of the B Minor score fitting his annoyed mood until he laughed at the absurdity of it, and Adagio cut off in favor of a trombone playing a descending “womp womp womp.”

His delivery truck had been loaded by the warehouse guys and as he leapt into the driver’s seat, he heard Ride of the Valkyrie playing dramatically, swelling his chest with exuberance. This continued for two minutes before fading into a montage of Beatles intros that started with Glass Onion and ended with Lucy in the Sky with Diamonds as he began slowing down to verify his address.

As he parked the delivery truck and opened the door, it began automatically buzzing a warning that the key was still in the ignition, but all Tom could hear was the twittering of the birds. This early feature of the programming had been left unchanged except that the sound transfer device had been supplemented to include the buzzing and hissing. When he rung the buzzer of his girlfriend’s apartment, he heard birds and when the air brakes of a parking bus kicked in, it was a flock of birds.

He could also change the dubbed sound from twittering birds to something else. He preferred birds most of the time, but he also liked the sound of a baying hound, running water, and a woman in ecstasy.

In reality, he didn’t want to give up his misuse of the Background Music™.

After his shift, he cycled home with the circus music playing in his ears once again, stopping only briefly to pick up a small bag of pot from his dealer acquaintance down the street. His dealer lived in a small apartment off of a dark alley strewn with debris. He always had the sensation that he would be mugged walking down the alley. The attack music from Psycho played ominously in his implant until the door opened to reveal the dealer who looked both ways down the alley and handed off a small bag in exchange for $25.

Back in the apartment, he flicked open his butane lighter to the sound of twittering birds overshadowing the hissing gas and lit up a small water pipe as Pink Floyd’s Wish You Were Here played softly in his implants. The rest of the evening would be spent on a collection of Doors, Velvet Underground, and Pink Floyd as he casually smoked his way through dinner and a restful sleep.

[1] For more background on Lifespotting Inc, see Memoirs of a Lifespotter and Replacement Friends in my other collection of short stories, Zunder Tales.