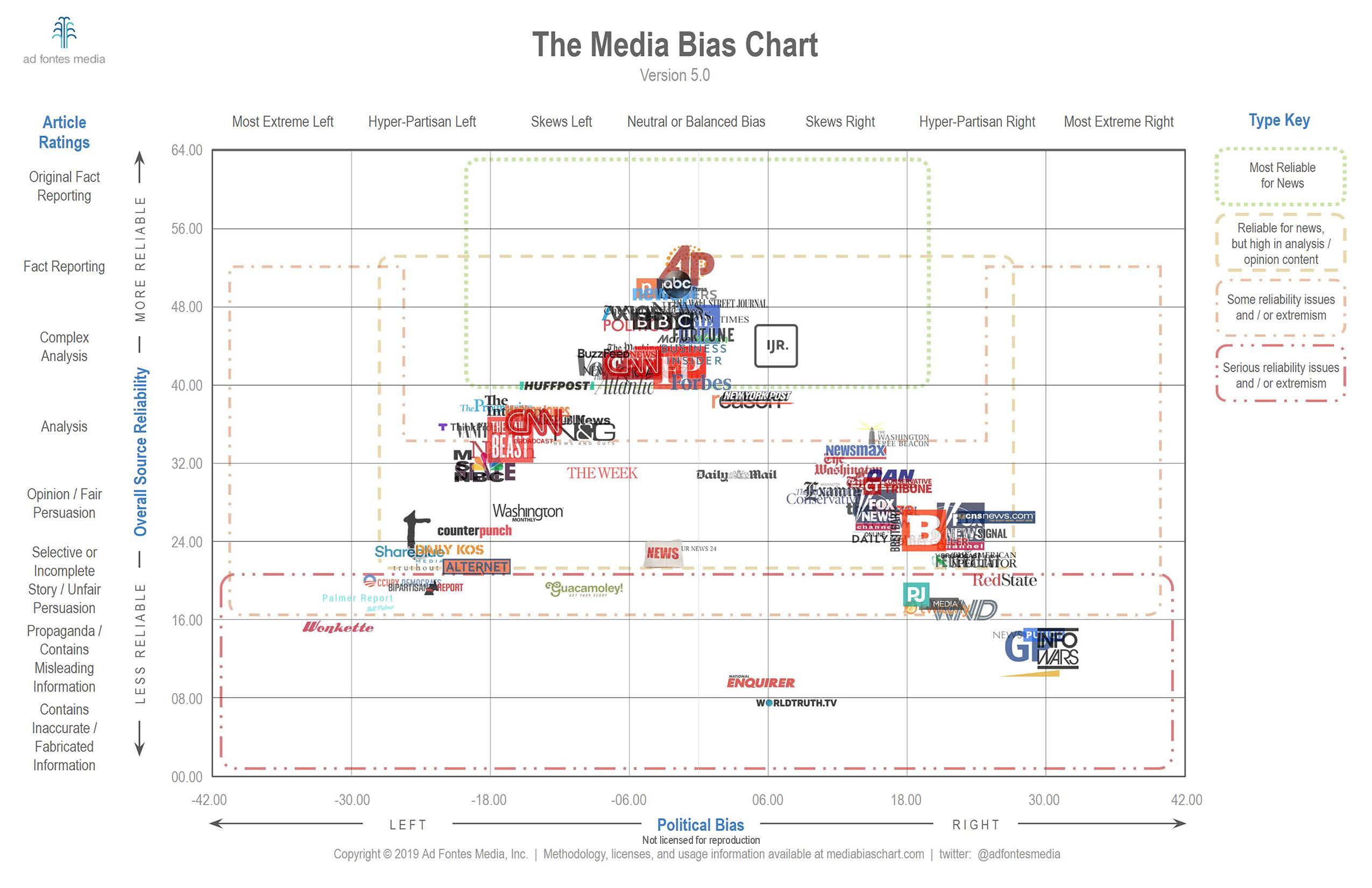 For the last several months, I’ve worked on The Media Bias Chart, a project that rates news sources.

The premise of the project is that if people are aware of biased reporting, they will have the opportunity to seek better sources.

Working with dozens of people from across the country and across the political spectrum, we rated hundreds of articles from 86 sources. Averaging those scores gives us a picture of the type of journalism from a particular outlet. Consistently fact-based and neutral reporting will put a source high and toward the middle of the chart. As editorial bias creeps in and articles become more dependent on analysis and opinion, they drift to the left or right and down.

Though the latest iteration of the chart is our most accurate yet, the work is never done.

Now we are experimenting with rating multiple organizations on how they cover the same event.

In my most recent review, I read six articles covering the CNN LGBTQ Town Hall.

I need to keep my individual ratings of the articles confidential, but I will look at each article with a broad review of its content and demonstrate that six different sources have six different perspectives. My review is done in the order that I read the articles, which was at random.

Vox covered it from the perspective of who “won” or “lost” the debate. Delving heavily into opinion and analysis, it looked at not just candidate performance but a gaffe by anchor Chris Cuomo and the apparent humanity of Anderson Cooper. They also covered the efforts by the transgender community to have their voices heard and the relative absence of questions about the bisexual community.

National Review opened with arguing that the very subject matter was irrelevant given current events in Turkey and Syria. They then mocked Biden for a gaffe about gay bath houses and then launched into what was mostly an opinion piece on how LGBTQ equality efforts would ultimately harm organized religion. While it did include some quotes from various law experts, it failed to support its opinions with any serious analysis. It closed its article by covering Elizabeth Warren’s dismissal of a hypothetical constituent who thought marriage is between a man and a woman. By nestling opinion between two bits of news, it tries to masquerade as a news story while really being just an opinion piece.

HuffPost made a human-interest story on Pete Buttigieg, focusing on his own coming out and what he brings to the debate as a gay man. It was predominantly fact-based. But one has to take into account the editorial choice to focus on the only gay man at an LGBTQ forum when considering how to rate the article.

NYT covered blow-by-blow, the protests from transgender activists as well as host and candidate reactions to them. This was by far the most fact-based reporting of the event, short on analysis and long on quotes.

The Federalist presented a typo-laden flogging of what it argued was “Democratic Propaganda” before lamenting that the event should have asked questions it thought were important (but that the LGBTQ community evidently do not.) It said the failure to address concerns of conservatives who were not present was an example of progressive bigotry. It also stated that children should be seen and not heard and letting the adults make decisions for them. Unlike National Review, it makes little effort to conceal it’s opinions.

Lastly, Business Insider wrote a story similar to Huffington Post, focusing on Elizabeth Warren, her performance, and her changing viewpoints on the subject. Like Huffington Post, it made a fact-based review of the candidate, but the editorial choice to cover the most viable candidate among the left-wing of the Democratic candidate pool must be taken into account.

So, one subject is covered by six sources, each with its own take. There is high-level fact-based reporting and there is heavily biased opinion and everything between those two extremes.

If you want to see where your favorite source is rated, here is a link to the interactive chart with clickable buttons at the bottom.