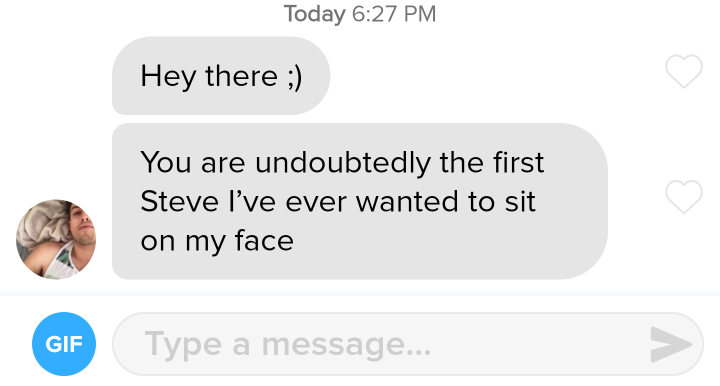 This was originally published on Medium. If you like this story, please give it an applause on Medium by following the link at the bottom of the page.

I’ve been working on a novel with a female protagonist and wanted to get a better perspective from women on social media.

Initially, I thought I could just create a Tinder account as myself. and interview women about their experiences.

My wife knew what I was up to.

I used the same image I use on my LinkedIn Profile and included images of my published books. My bio specified I did not want to hook up and merely wanted to talk to women about their experience.

However, after two nights of swiping right and requesting interviews, I had no takers and gave up on the prospect of Steve the Author.

Throughout all of this, a friend had been sending me screen shots of her experiences on Tinder and she suggested that I just create a fake account and be a woman for the evening.

She sent me a couple of pictures that showed enough skin to spark interest but without any readily identifiable marks.

And Steve the Author became Steve the 38-year-old SAHM (stay-at-home-mom). Strangely, while I could change my gender and occupation on Tinder, I couldn’t change my name. I explained this away with my one-line bio.

In the first 15 minutes of being a woman, I received 100 likes and as fast as I could swipe right on the likes, the messages began pouring in, mostly from shirtless men flexing biceps in front of a urinal.

No one seemed to bat an eye at the fact that my name was Steve. One even remarked “Hey there 😉 You are undoubtedly the first Steve I’ve ever wanted to sit on my face.”

This was one of the nicer messages, amid a torrent of monosyllabic greetings and vulgar propositions of what they wanted to do to me (aside from me going for a moustache ride.)

The comments would have made my high-school self blush.

It seemed ironic to me that things I might have said to a woman in a chatroom when I was 15 were coming back full circle as a catfish on Tinder.

I lost count of the numbers of opportunities to see engorged dick pics if I was willing to head over to WhatsApp. That was my hard limit as a woman (and as a man). My phone number is very easily searchable online and I really didn’t want to be tracked down and murdered for my catfishing.

One person wouldn’t take no for an answer on the dick pics.

“Imma send it to you. You need to see it to appreciate it.”

“You need to work on your descriptive skills. What if you witnessed a murder and needed to describe the perpetrator? You couldn’t just whip out your dick and say that the murderer was short, skinny, and bald?”

As the evening went on, I understood why the friend who lent me her photos trolls men for amusement on Tinder with no intention of going any further with it. So I began trolling them too, amusing myself with the question of whether they would fight a horse-sized duck or 100 duck-sized horses.

The answers were lackluster.

Then I deactivated my account. I had all the material I needed and didn’t want to be a woman anymore.

I know Tinder is scraping the bottom of the barrel when it comes to online dating apps, and if you want to say, I got what I deserved, I get it, but you might be missing the point.

As a man, I was ignored.

As a woman, I was constantly harassed for three hours.

In a typical evening at a bar, a woman has to contend with saying no to 20 men. In an evening on Tinder, it’s 200. Tinder is ultimately a reflection of society at large, just at an expedited rate.

It sucks that I had to be a woman for a few hours to get a better understanding of the empathy they deserve.

If you don’t believe me, make a catfish account.

You won’t even have to change your first name.